Join the March Against Violence in Casino 8 November, 10.15am meeting in Graham Place (next to the Council Chambers). 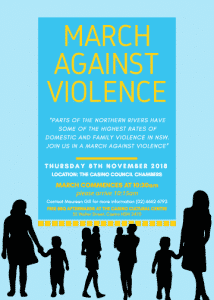 Richmond Valley has one of the highest rates of domestic violence in NSW, and those statistics are only reported incidents. Many more go un- or under-reported.

People often think of domestic and family violence (DFV) as physical abuse, but there are many other forms less easily recognised that include:

The Casino March Against Violence will raise awareness and create a visual message to community members to say “we will not stand by and tolerate it anymore; we are willing to speak out and condemn domestic and family violence in all its forms”.

Following the march, a community BBQ and information stalls will be available to provide service information and assistance for those affected by Domestic and Family Violence.

All our community – women, men, children, school students, businesses, community services and local government – are invited to stand together. As a community we MUST come together to say that ENOUGH IS ENOUGH. The violence has to stop.

More information: Maureen Gill, CASPA Family Supports Casino on 6662 6792 or just turn up on the day.