Chesney, who grew up 50 kilometres outside of Forbes on his parent’s farm, has intellectual disability and autism and Ross said life before the NDIS was difficult.

“We didn’t have a lot of funding or support,” he said. “I used to spend hours in the car, driving 200 kilometres a day, two days a week, to get Chesney to his after school work at the biscuit factory.”

Then they met their Local Area Coordinator, Tracey, from Social Futures, and things began to get easier.

Chesney’s NDIS plan included transport funding. It meant he could catch a taxi to Parkes, halving his dad’s travel time, but Ross and Sandy were becoming concerned about Chesney’s future.

He had lived with them on the farm all his life, and they knew they weren’t going to be around to take care of him forever.

A big change came though, when Ross and Sandy took off to New Zealand for their first holiday alone in 30 years.

“Chesney received NDIS funding for respite care for the two weeks they were away. He stayed in a little apartment, in Forbes, with regular contact from support workers, and discovered independence.

“He did whatever he wanted for two whole weeks while we were in New Zealand and he’s been badgering me to move out on his own ever since!” Ross said. 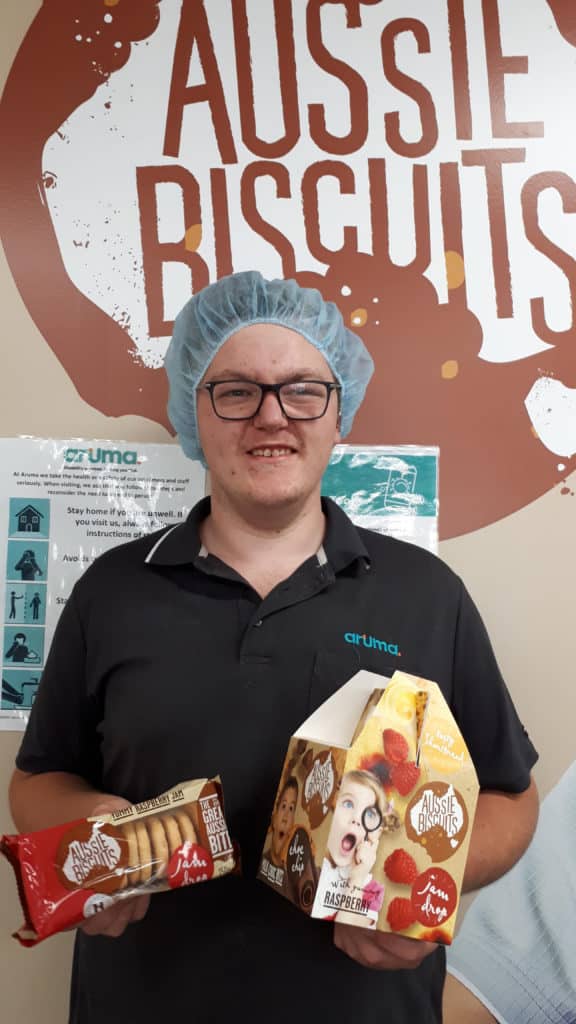 The move to his own home happened a month ago and Chesney hasn’t looked back.

“He is a five minute walk to his workplace. He gets himself off to work each day, and it’s only a short bike ride to his older sister’s house.

“I went to see Chesney last weekend,” Ross said. “At 10am, he was lounging around in his pyjamas, eating pancakes he’d made himself for breakfast.

“He goes out on Thursdays with two of his friends from the biscuit factory and comes home to see us every second weekend.

“Chesney now has access to a range of activities. He has more choice over what he wants to do and how he wants to spend his time than he has ever had before,” Ross said.

Once a week, Chesney joins a support group and goes to Orange or Dubbo where he visits the library, gym and pool.

“If you saw Chesney two years ago, he was a very different person. He actually says hello to people now, he smiles and has confidence. He has independence now and things to do with his time.

“He just wouldn’t have been able to do this before. Nowadays he has support funding for someone to come and visit him every day, to help him write a shopping list of what he wants to eat for the week, and to make sure he isn’t cooking himself fish and chips every night!”

“Being unwell myself, the knowledge he will have ongoing lifelong support from the NDIS if he needs it, is a great relief,” said Ross.

“Everything is working really well. I’ve never had trouble or difficulty getting everything we’ve needed.”

Social Futures delivers Local Area Coordination services for the NDIS across more than 50% of NSW.

Social Futures has welcomed the release of the NSW flood inquiry but is calling on the Premier to co ...