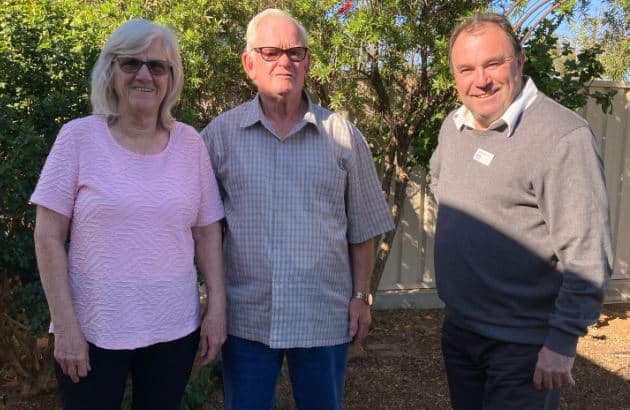 At 67, Broken Hill man Rob Lindsay has lived with an intellectual difficulty all his life.

“There just weren’t assessments for that sort of thing when Rob was younger”, said his sister Joan.

“At school, he didn’t keep up, that’s just the way it was. When he left school, he went on a disability pension, but there was nothing for him to do – no programs or supports,” Joan added.

But life has taken a positive turn for Rob who has come along in leaps and bounds since meeting Michael at Social Futures and becoming a National Disability Insurance Scheme (NDIS) participant.

“People would say to me a few years ago, when he first started on the NDIS, ‘he walks upright now’, and ‘he’s so proud of himself’.

Without the NDIS he wouldn’t have been able to afford the supports he now has. The NDIS has put that within our grasp,” Joan said.

“Michael, our Social Futures LAC, has been really fantastic.

“He keeps in touch and any time there is anything up, I just have to ring him.

“I can see him anytime – the support is there the whole time. Social Futures have been able to suggest other additional supports for Rob to access through his plan. They’ve been just wonderful,” said Joan.

Prior to receiving NDIS support, Rob lived with his elderly mother, and Joan would do the shopping, cooking and housecleaning with support from home delivered meals a couple of times a week.

Now, Rob is able to access home support through the NDIS for housecleaning and cooking. He has even learned to cook for himself, preparing his own meals two or three nights a week.

This has taken the pressure off Joan, who can now spend more quality time with her brother, as well as more time with her husband.

“I think the NDIS is fantastic,” Joan said. “It’s a real load off, you’ve got no idea how much.”

“He can now use an ATM card, and is learning literacy and numeracy so he can write his own grocery lists,” Joan said.

“Here’s me, I can’t even use a computer and he does computers!” Joan said with a laugh.

“Now, he can also write cards to his niece and nephew, which he wasn’t ever able to do before!”

Joan said the social aspects of the groups Rob accesses have been a lifesaver for him, and now he goes on outings to the cinema and the shops.

However, the most incredible thing for Rob has been his increased independence.

For the first time Rob travelled on his own by bus from his sister’s home in Adelaide back to Broken Hill.

“He never would have been able to do that before,” Joan said. “His confidence and independence have really come a long way.

“I couldn’t fault the staff in terms of the help I have had through the NDIS. It’s just phenomenal,” Joan added.

Rob’s NDIS supports have helped him:

Social Futures is committed to the continuation of delivering support services in a safe, practical ...