Zac’s change of scenery pays off 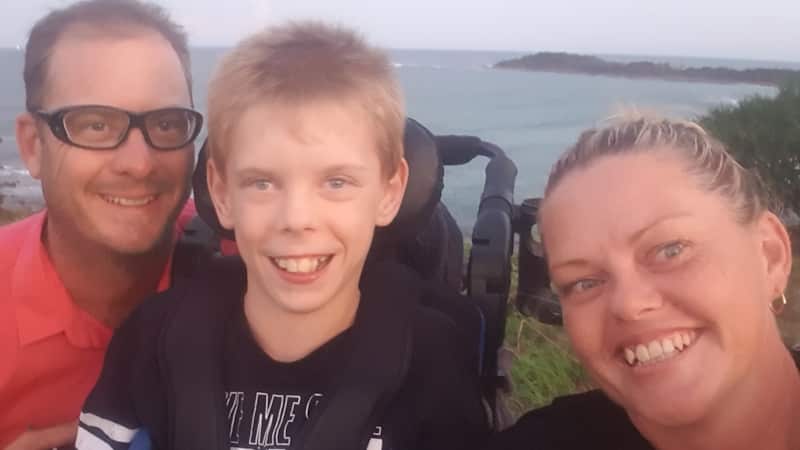 When Zac Oatley moved to Yamba on NSW’s North Coast with his family two years ago it was the start of a new life in more ways than one. Not only was it a change of scenery from his native Queensland, it was also the start of his National Disability Insurance Scheme (NDIS) journey.

The 10-year-old schoolboy has cerebral palsy and is quadriplegic, complicated by dystonia – a neurological condition that causes muscles to spasm involuntarily.

Mum Crystie says that since the move and the start of his NDIS supports, Zac “is one happy kid”.

“Moving to Yamba has been a great experience for Zac,” Crystie says. “He’s now in Year 5 and being really well supported at school in a mainstream class.

“Zac physically can’t do much, including feeding himself. However, his verbal skills are slowly getting better and he understands most of what you tell him.

“He enjoys socialising but he’s got his own way of letting you know when he wants ‘alone time’!”

Crystie manages Zac’s NDIS plan herself. After two years, she finds that self-management brings many benefits, such as flexibility in choosing the support worker of her choice.

“I met this gentleman back in 2017 when we were both undertaking a Certificate III Individual Learning Support course at TAFE. He’s basically more of a mate to Zac than a carer and Zac loves him. They’re always going out to the beach, to the skatepark or the shops together.

“Zac’s happy and I’m happy. After all these years of struggling to fund Zac’s care through working multiple jobs and not having a spare minute, finally my husband Ross and I can have some time for each other.”

NDIS funding has also allowed Crystie to purchase a range of assistive technology for Zac including an electric wheelchair, a standframe, a walker, Eye Gaze communication technology, orthotic shoes and bath aids.

Other supports include speech therapy, physiotherapy and occupational therapy, all organised with the help of Social Futures Local Area Coordinator Susan Knight.

“We’re working on building his independence and eventually we’d like to build the ‘Zac house’ to cater to his long-term needs,” Crystie says.

In the meantime the focus is on Zac’s upcoming femur rotation surgery scheduled for July this year, a procedure that will allow him to straighten his legs for the first time.

“Zac is a tough cookie but the recovery period is going to be six to eight weeks, so it will be challenging. However, the payoff will be that he will be able to walk much better.”

Zac’s third Plan begins in May and the family is simultaneously running a crowdfunding campaign to finance extra equipment for when Zac gets out of hospital, such as a heated spa for hydrotherapy and a hi-lo lift bed.

“Our aim is to raise $12,000 and we’re well on our way,” Crystie says. “After all this time, we’re finally able to look forward to the future with confidence.”

“Eventually we’d like to build the ‘Zac house’ to cater to his long-term needs” (Crystie, mum)

Zac’s NDIS supports have helped him: