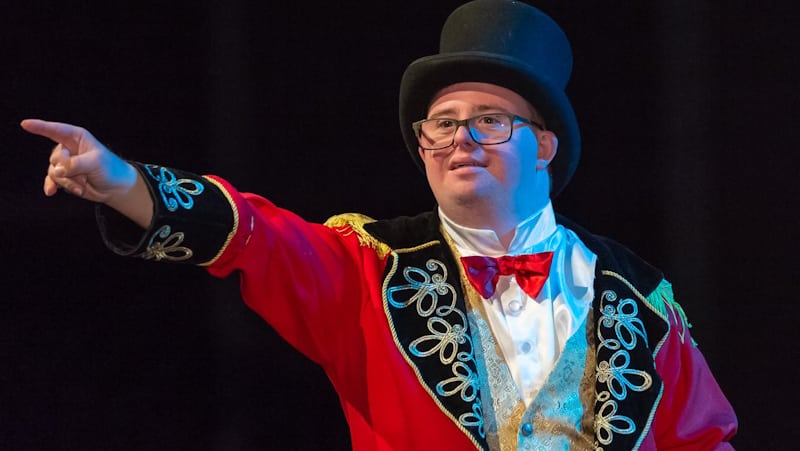 Nathan Johnston is a born performer and artist. Raised and still living with his family in NSW’s Tweed Heads region, he has always loved acting, painting and singing.

Since leaving school 10 years ago he’s taken his talent to the next level, and with the support of his family and the National Disability Insurance Scheme (NDIS) there’s no telling how far he can go in the entertainment world.

Nathan has Down Syndrome and two years ago was also diagnosed with autism, just before being accepted onto the NDIS and getting his First Plan.

With his NDIS funding and the support of his Local Area Coordinator Monica, who works for Social Futures in Tweed Heads, he’s been able to tailor his supports much more precisely to improve his fitness and help achieve his dreams.

Last year he starred in a short film called ‘The Cover’, made by a local Tweed Heads production company that was entered in the 2018 Focus on Ability Short Film Festival. It didn’t win but earned lots of praise for its powerful message of acceptance.

However, Nathan’s biggest focus is on the ‘Night of Abilities’ showcase for Tweed coast performers with disabilities. Nathan came up with the idea several years ago and his family, led by mum Elaine, decided to help him make it a reality.

The first Night of Abilities took place in 2015 with family friend, TV personality and former Test cricketer Greg Ritchie stepping up as host. Starring Nathan and friends from his day program, the event was a great success and since then the show has gone from strength to strength. Last year it attracted an audience of more than 300 people.

From strength to strength

Now into its fifth year, the family has decided to move Night of Abilities to a bigger venue – Tweed Heads’ Elevation Church – to ensure it can play to an even bigger audience. The show will also feature a broader range of performers with disabilities, drawn from schools across the region.

All funds raised by ticket sales, donations and raffles go towards the Kids In Need Association, which supports young children living with disabilities or with terminal illnesses. Nathan’s carer, Mel, says thousands of dollars have already been raised for the charity over the past four years.

“Nathan, his carers and his family literally go knocking on the doors of businesses right through the area, from the Gold Coast and all the way down to Murwillumbah, asking for donations,” Mel says.

“Some businesses donate money, others donate artworks, dinner vouchers or cakes – one business donated a Harley Davidson ride. The local community has been so generous.”

When the lights go up on 31 August 2019, Nathan and his friends will be ready and waiting to put on the best show yet. While Nathan can’t confirm all the details, he says it will feature plenty of his favourite songs, dancing, even a flash mob.

To find out more, including pictures and videos from previous years’ shows, visit the Night of Abilities Facebook page at facebook.com/pg/NightOfAbilities.

Nathan’s NDIS supports have helped him:

END_OF_DOCUMENT_TOKEN_TO_BE_REPLACED

Wording up for a wider world

The world is making much more sense to Catherine Ryan since she was accepted onto the National Disability Insurance Scheme (NDIS).   The 33 year old lives in Orange and has experienced schizophrenia for as long as she can remember, disrupting her education and...

END_OF_DOCUMENT_TOKEN_TO_BE_REPLACED

From homebound to outward bound

Nicole was diagnosed with multiple sclerosis (MS) in December 2009. She tells her story in her own words: I went to the doctor because I had three cold fingers and that's when I got the diagnosis. It was devastating. I was a full-time working mother and it seemed like...

END_OF_DOCUMENT_TOKEN_TO_BE_REPLACED

Joseph's birthday in November last year was a double celebration - turning 40, and spending his first year as a National Disability Insurance Scheme (NDIS) participant.   He marked the occasion with a concert in front of 80 invited guests, singing covers of his...

END_OF_DOCUMENT_TOKEN_TO_BE_REPLACED

When Zion Levy Stewart first started sketching people who visited his family home at age 20, everyone thought it might help him pass the time. Twenty years on, this National Disability Insurance Scheme (NDIS) participant was an entrant in this year's 2019 Archibald...