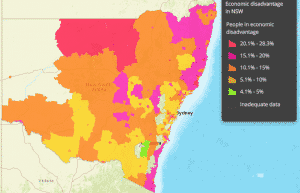 Regional communities in NSW are doing it tougher than their city dwelling counterparts. That’s the message from new research mapping social and economic disadvantage across the state released by the New South Wales Council of Social Services (NCOSS) today, echoing Social Futures concerns for the rural and regional communities we support.

With 888,000 people living in poverty in NSW, no community is immune to hardship, but our rural and regional communities are doing it particularly tough explained Chief Executive of Social Futures, Tony Davies.

“While only 30 per cent of the population live outside the metro areas in NSW, our regional communities are home to more than half of the people living in poverty across the state.

“There is a myth that our regional coastal communities in particular are an oasis of paradise but low incomes and high unemployment rates, coupled with high rates of housing stress, mean that many of these communities have significantly higher rates of poverty than the rest of the state. In Nambucca Heads for example, almost 1 in 4 people are living below the poverty line.

“Most concerning, children are the most likely age group to be living in poverty  with one in six children live below the poverty line. In some parts of Northern NSW this figure is closer to one in four.

“With many communities facing the additional bite of the drought it has never been more important for government to take real action to address the inequality in regional communities.

“We urgently need the government to invest in social housing, early childhood education and to raise the Newstart Allowance in order to break the cycle of poverty,” he said.

This report provides a detailed picture of the extent of disadvantage across NSW with interactive maps allowing users to explore how poverty impacts people in their region.